An Autonomous Drone for Medicine Delivery in Remote Areas 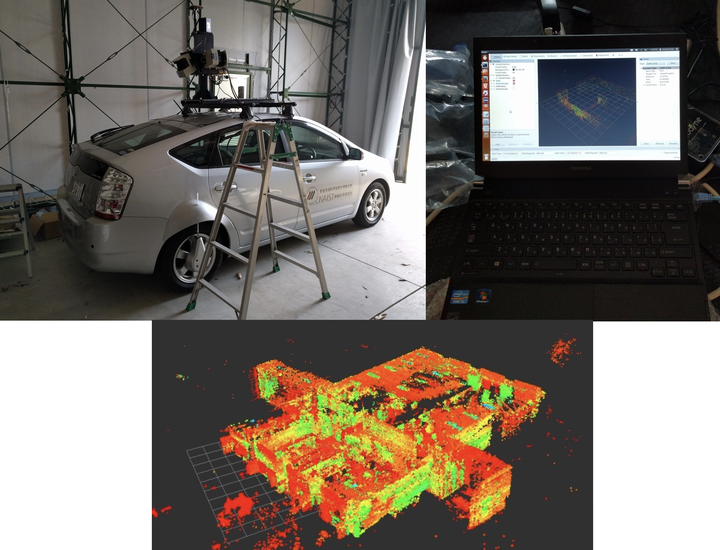 This project aims to provide telemedicine throughout Japan, especially in rural and hard-to-reach areas. It includes automatic measurement of biomarkers, their evaluation, daily conversations with doctors via the Internet, telediagnoses, and automatic delivery of medicines by self-driving cars or drones.

During a research stay in Japan from August 2015 to April 2016, I developed algorithms for automatic detection of suitable landing sites for drones in unknown areas and for SLAM for cars and drones for the automatic delivery of medicines.

This section covers the methods, principles and programs we used. First we give a short overview of ROS, then some of the specifications of the Velodyne LiDAR HDL–32E are shown, followed by the principles of two essential algorithms the iterative closest point (ICP) and the RANSAC algorithm.

ROS (Robot Operating System) is a framework for developing software for robots and contains several tools, libraries, conventions, hardware abstraction, device drivers etc. ROS is available under BSD licence. ROS is modular and works with a network like structure. ROS contains nodes, messages, topics and services. The ROS master manages the connections between the nodes and is passed for a DNS server. Nodes are able to publish and subscribe messages and offer services. Each node is an independent process. Once a node is startet the node contacts the ROS Master and announces which topic it publishes and to which topic it subscribes to. Then the master manages the connections between the publisher and subscriber. In the following figure the communication between two nodes is shown. The nodes are communicating with messages under a certain topic. The topic identifies the message. A message can contain basic data types like integer and arrays of basic data types. Messages with a topic are always published. In contrast services are only executed when a node asks for them. There are much more information about the concept of ROS; too much to cover them in this tutorial. If you are interested in more information have a look at the ROS wiki here.

For obtaining the data we use a Velodyne LiDAR (Light detection and ranging) HDL–32E 3D laser range finder. For a full list of specifications visit the Velodyne LiDAR website here.

In general, RANSAC is used to estimate a model for measured points. These points may contain outliers and measurement errors. In the case of finding a landing site, the model is a flat surface. The algorithm is iterative and can be divided into 3 steps. In the first step, the algorithm randomly selects from all points as many points as needed for the model definition, e.g. 2 for a line or 3 for a plane. In the second step, all model parameters are calculated based on the selected points. The third step involves the calculation of the consensus set. This set contains all points whose distance to the model is smaller than the defined threshold. The three steps are repeated until a certain iteration number is reached. Then the model with the largest consensus set is assumed to be the correct one. There are three parameters, only one of which needs to be fixed: