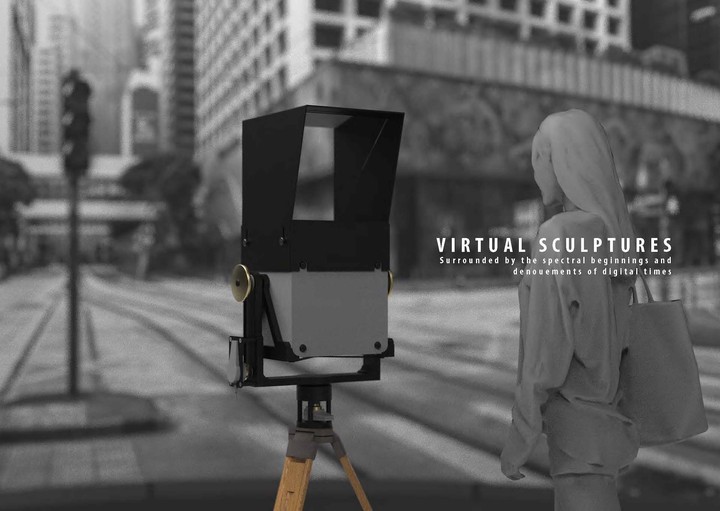 In the late 1970s, Jeffrey Shaw and his Eventstructure Research Group partner Theo Botschuijver embarked on a series of computer graphic and augmented reality experiments that were inspired by two technologies: first, an age-old illusion technique called ‘Pepper’s Ghost’ that dates back to the 16th century—a technique that uses a see-through mirror to create ‘ghost’ images that seemingly float in space; second, the pioneering virtual reality head-mounted display (HMD) invented by Ivan Sutherland in 1968, which he called the ‘Sword of Damocles’. Their first artwork that resulted from their joint research was “Virtual Sculptures” in 1981.

It utilised an Apple II computer to create the 3D computer graphic imagery, a tripod mounted CRT monitor fitted with a Fresnel lens and see-through mirror and an interactive design that allowed the viewer to rotate and tilt this monitor so as to discover animated computer-generated virtual objects floating about at different locations in the physical exhibition space. This artful apparatus prefigured the augmented reality (AR) systems that were introduced into the market some twenty years later and which are currently a fast-developing industry. While this artwork has recently entered the collection of the ZKM Center for Art and Media in Karlsruhe, Germany, the exhibition at WYSIWYG will be the first public showing of its re-make since the original no longer exists.

The reconstruction of the CRT monitor, Fresnel lens, see-through mirror and tripod assembly are as faithful to the original as possible. Similarly, the appearance of the animated computer graphic images (simple low resolution wireframe objects) is also replicated, but now using a newly programmed PC rather than the obsolete Apple II computer and the subLOGIC A2-3D1 software that ran the original.For its exhibition at WYSIWYG, this artwork is being presented with its original content in a newly conceived installation format that is locally contextualised. The interactive apparatus is positioned at the centre of a large 7m diameter all-encompassing panoramic photograph, so that its virtual AR objects can be seen to be floating within the scenery of that photograph. The Hong Kong photographer John Choy was commissioned to make a black and white panoramic photograph of Hong Kong’s Central district for this purpose. Choy deploys an aesthetic strategy he developed in earlier panoramic photos taken of Hong Kong, wherein this urban landscape is completely devoid of people. In the context of the installation at Osage, this means that only the artwork’s virtual objects now occupy Central’s eerily vacant environment.

My role was to recreate the original AR experience while maintaining as many of the old components of the Apple II as possible.

The original installation from the late 1970s used two Apple II game paddles, that were used to derive the rotation and tilt of the CRT. We re-used these for this reconstruction. I used an Arduino to read the internal potentiometer of the paddles, implemented a filter algorithms, and then used the output to drive a virtual camera 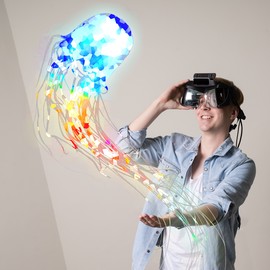